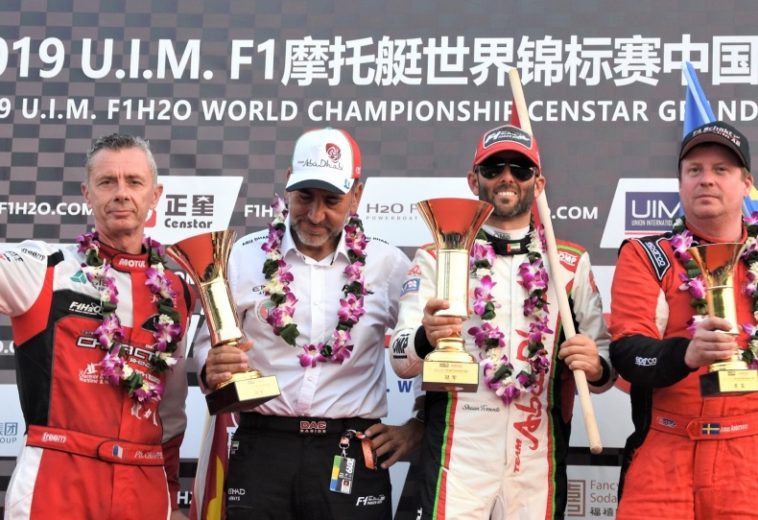 Shaun Torrente won the Grand Prix of China, afetr the fourth place obtained on Saturday in the first race scheduled in Xiamen,  and more importantly to him and Team Abu Dhabi, he regained the lead of the 2019 UIM F1H2o World Championship.

Torrente leads Jonas Andersson (who was third in this race and second in the saturdays’ one), by 5 points going into the final race, which will be held in Sharjah on December 21:  only those 2 drivers can now win the title. Torrente leads the World standing with 64 points, Andersson is following with 59 points.

At the beginning of the Sunday race, Torrente was put under pressure in the race by Grand Prix of Xiamen winner, Alex Carella.

The race was yellow flagged on lap 4 when Cédric Deguisne’s motor departed company from his Moore hull, when it was restarted 3 laps later, Torrente and Carella got away well until the Italian spectacularly somersaulted out of contention.

In a race of attrition only nine of 17 starters finished, the Grand Prix ending under a final yellow flag after 31 laps, with Torrente winning from France’s Phillippe Chiappe and Andersson in third.

At the restart on lap 12 Torrente came under pressure from Peter Morin who maintained a sustained challenge for 10 laps and closed to within 1.3s when the yellow was shown again, this time heralding the exit of Thani Al Qemzi after barrel rolling his DAC, his title challenge evaporating at the same time.

Again Torrente managed the restart well but this time it was Chiappe and Jonas Andersson taking up the chase after both passed Stromoy with Chiappe’s teammate Morin retiring on lap 23 with an engine problem.

In the closing stages Torrente looked to have the race under control when the yellow was raised on lap 28 after Alberto Comparato caught a wave and nosedived ripping off his left sponson, Torrente leading Chiappe and Andersson round for three laps and taking the chequered flag under the yellow.

Both the World titles, for drivers and Teams, will be decided in the Sharjah Grand Prix on December 21th!